Vespine Wasps of the World. Behaviour, Ecology & Taxonomy of the Vespinae. 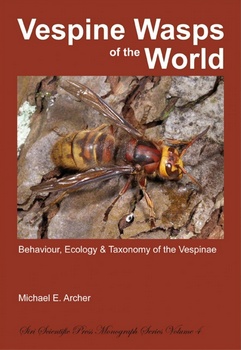 352 pp, 240 x 165 mm, hard cover, 116 figures, 131 colour photos
This book is an up-to-date review of the biology and taxonomy of the vespine wasps of the world; the first of its kind. An introductory chapter gives an account of the biology of the subfamilies of the Vespidae. The varied life cycles are then considered, including social parasitism (usurpation), swarming, polygynous and perennial species, illustrated with flow diagrams. An ethogram of wasp behaviour, including chemical communication, is developed followed by a discussion of controversial behaviours (trophallaxis, brood destruction and larval neglect, queen and worker influence on the organization of behaviour) with relevant theories. A new research program is outlined for the study of such organization. A numerical description of the development of a colony, including adult production, is given including models that have been developed from such data. Life history traits are organized to show different strategies pursued by Vespula and Dolichovespula species. The genetic element is included to try to further understand the development of a colony. Foraging activity is described in great detail, including a numerical description of day-by-day variation of the collection of resources of a colony with the recognition of the foraging characteristics of failing colonies. A history of population ecology is outlined in terms of causes of mortality, reproductive rates, life tables and the population dynamics of weather and regulation theories, particularly showing the importance of the endogenous mechanism important in terms of the variation in colony growth and annual variation in colony numbers. Our limited knowledge of community ecology is reviewed. A fully illustrated and up-to-date key to the world species, with a history of the production of dichotomous keys for vespines is provided, with a final chapter on the history of the colour variations (subspecies?), particularly of Vespa, illustrated with 131 colour photographs.