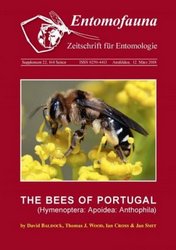 Autoren: David BALDOCK & Thomas J. WOOD & Ian CROSS & Jan SMIT
This supplement provides a list of records, both from literature and from recent collections, of 680 bee species from mainland Portugal. Up to 1996 there were remarkably few published records of Portuguese bees, consisting of only around 325 species. However, in the last IS years or so there has been a considerable amount of collecting by numerous Hyrnenopterists, mainly in the Algarve, as well as inspection of unpublished material housed in museums and private collections. This effort has added over 300 species to the list. Further recording is needed, especially in the north. It is thought that the total number of bee species in Portugal could be as high as 700.
55 Abildungen, 164 Seiten.