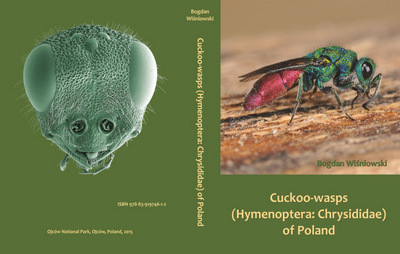 The book describes diversity and distribution of Polish Chrysididae. Chapters deal with adult morphology, biology and protection of cuckoo-wasps. The book includes keys to identification of subfamilies, genera and species. The keys include 110 species of which 96 were recorded in Poland so far. Most of the species are shown on colour photographs. The book is illustrated with 500+ mostly colour images including SEM-images, photographs of the wasps, their hosts, morphology details, more than 90 distribution maps, phenology diagrams etc. There are also 41 anaglyph 3D images showing details of external body structure of cuckoo-wasps. The book is accompanied by the distributional catalogue of the wasps in Poland, as well as appendices listing biotope preferences of Chrysididae in Poland, plants visited by adult cuckoo-wasps and their known hosts.
Hard cover, 563 pages